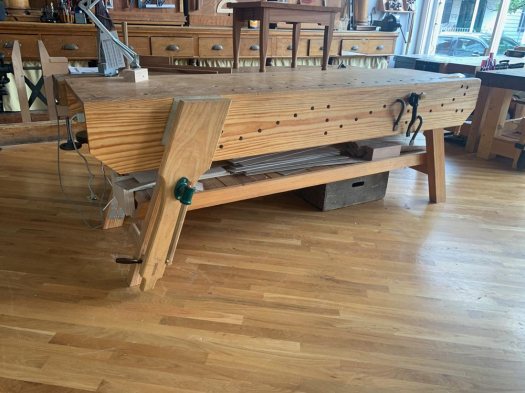 I built this bench in 2006 for my first book, “Workbenches: From Design & Theory to Construction & Use” (Popular Woodworking). It was the first English-style bench I’d ever built or used, so there was a bit of a learning curve, both with its construction and in learning to make the most of it while working on it.

On construction: The bench uses clever engineering to obtain its rigidity. But cleverness doesn’t always win the day. The benchtop started out as a single layer of 2x yellow pine. That proved to be too bouncy in use. So I ended up filling the underside of the benchtop with a second layer of 2x blocking between the “bearers” that support the benchtop.

On use: I had to learn to work with the wide front apron, which is a blessing and a curse.

This particular design is based on several historical benches that I studied, including the version in Peter Nicholson’s “Mechanic’s Companion,” which also provided key construction information. The angled legs and tail vise came from other examples.

This bench is backed against my French bench and I work on it regularly. What’s most surprising about the bench is how little I’ve modified it in 14 years. I added a commercial planing stop, a few holdfast holes and a bench light.

This bench is also featured in the blog entry: “Divorce is Hard on Benches.”

Items shown or mentioned in the video: